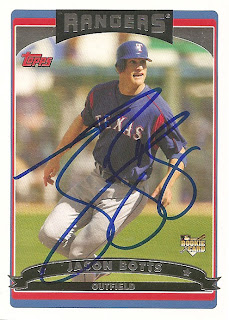 Who is this? Former Texas Rangers outfielder/first baseman Jason Botts


What is this? An autographed card from the 2006 Topps set


Where'd I get it? I got it signed before Thursday night's game between the Newark Bears and the Camden Riversharks

How much did it cost? I'm pretty sure the card came out of a pack.

Why is this so special? Although Jason Botts wasn't selected until the 46th round of the 1999 amateur draft, he developed into one of the Texas Rangers' top prospects.

Botts made his major league debut on Sept. 14, 2005. He went 0-for-3 with a walk as the DH in a Texas victory over Baltimore. Botts appeared in 9 more games that September, and had short stints in the big leagues in each of the next three years.

While he never really lived up to expectations, Botts appeared in 93 major league games and has a lifetime .230 batting average, a .669 OPS, 5 home runs and 28 RBI.

In 2008 and 2009, Botts played in Japan. This year, he went to spring training with the Chicago White Sox but was cut. He is currently the starting first baseman for the Camden Riversharks in the Atlantic League.

Botts has an interesting signature, but please don't ask me to read it.
Posted by Paul Hadsall at 11:46 PM