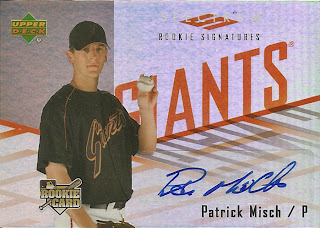 Who is this? Buffalo Bisons' pitcher Pat Misch

What is this? An autograph card from the 2007 Upper Deck Spectrum Rookie Signatures insert set

Why is this so special? After spending parts of three season in the bullpen for the San Francisco Giants, lefthander Pat Misch came to the Mets midway through the 2009 season. He appeared in 22 games for New York, including seven starts. Misch generally kept the Mets in games. I would not be surprised if he sees time in New York again this season.

I'm not quite sure what's going on with Misch's last name in the signature on this card, but it looks interesting. For those who might be wondering, the autograph is signed on a clear label that is attached to the card. It looks nicer than most, but it's still a sticker autograph.
Posted by Paul Hadsall at 7:56 AM