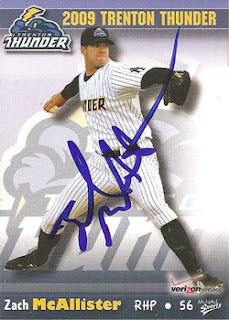 Who is this? Zach McAllister, a minor league pitching prospect

What is this? An autographed card from the 2009 Trenton Thunder team set

Where'd I get it? I got it signed after a Trenton Thunder game this summer

How much did it cost? The team set cost $10 in the Thunder gift shop

Why is this so special? Baseball America has ranked McAllister as one of the Yankees' top 10 prospects for the two years. A 22-year-old left-hander, McAllister went 7-5 with a 2.23 ERA for Trenton this year. His ERA was more than a full run better than the next qualifying Eastern League pitcher.

McAllister should start the season in AAA in 2010, and most scouts seem to project him as a solid mid-rotation starter in the majors. I wish I had gotten to see him pitch this year, but I suppose I'll have the chance to watch him on TV in a year or two if the scouts are right.

There were two well-known prospects on the Trenton Thunder this season: McAllister and catcher Jesus Montero. While Montero ducked the autograph seekers after the game I went to, McAllister graciously signed for the dozen or so people who approached him after the game. He's got a pretty legible signature for a lefty. ;-)
Posted by Paul Hadsall at 7:52 AM

I went to the all-star game at Trenton this year. I waited online for more than 1/2 hour just to get Montero's autograph.

By the time I reached the front of the line, they were calling for the signing session to be over. I caught Montero's eye, showed him the ball and he reached over and signed it.

I left with that ball (some team sets as well) and I was a happy girl.

I went down to Charleston in the summer of 2008 and tried to get Montero Auto but he was a jackass. I ended up going to AA All-Star where he graciously sign his scribble Auto for me.