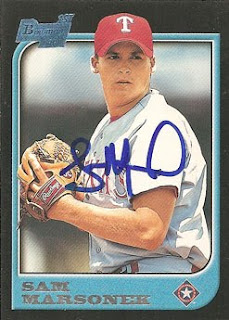 Who is this? Sam Marsonek, a former pitcher for the New York Yankees

What is this? An autograph card from the 1997 Bowman set

Where'd I get it? I got the card signed at a Somerset Patriots game in 2007

How much did it cost? The card was probably a quarter or so; the autograph was free

Why is this so special? Sam Marsonek was the Texas Rangers' first round draft pick in 1996. He was traded to the Yankees in exchange for Chad Curtis in 1999.

In 2007, Marsonek pitched for the Somerset Patriots in a final bid to get back to the majors. He got a contract from the Washington Nationals organization for the 2008 season, but he was apparently cut during spring training.

I'm not sure how I'd handle it if I spent all those years trying to get to the majors and my chance was over after facing just six batters. On the one hand, he can say that he got to pitch off the mound at Yankee Stadium -- not many people can. On the other hand, it would be awfully hard not to think about what might have been.

Marsonek's autograph is a simplified S_M_k, which he could sign quite quickly.
Posted by Paul Hadsall at 11:24 PM

I'm always a sucker for these type of stories.

It reminds me of 'The Natural' with that guy who got one at bat finally. Moonlight Graham I think.

He's just 31 years old and already experienced a dream millions had as kids. I hope he knows that. Often it's lost in the negative.