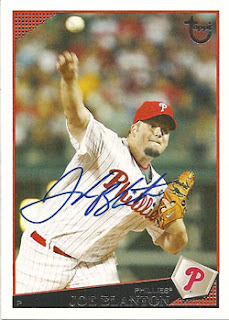 Who is this? Joe Blanton, a pitcher for the Philadelphia Phillies

What is this? An autograph card from the Target-exclusive throwback variation of the 2009 Topps set, #207

Where'd I get it? I wrote to Blanton back in April and asked him to sign it. Now that the season is over, he's catching up on his fan mail... I got it back today.

How much did it cost? The card came out of a pack from a retail blaster; postage was 84 cents.

Why is this so special? Joe Blanton is a workhorse. Since 2005, Blanton has thrown at least 190 innings every season.

He was the first round draft pick of the Oakland Athletics in 2002, and he spent the first three and a half seasons of his career there. In 2008, the Phillies traded Josh Outman and two other minor leaguers to Oakland for him so they could bolster their starting rotation.

Blanton went 4-0 down the stretch in Philadelphia, and pitched well in two of his three post-season starts. He started and won Game Four of the World Series, and he became the first pitcher to hit a World Series home run in my lifetime.

Blanton finished the 2009 season with a solid 12-8 record. His post-season starts were not very impressive, but he wasn't charged with a loss in any of them.

Blanton has a surprisingly legible signature for an active Major Leaguer.
Posted by Paul Hadsall at 11:53 PM

Wow! You actually write to Phillies?

I don't have a problem with too many of them individually -- collectively, well that's a whole different story. :)