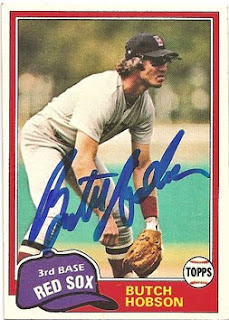 What is this? An autograph card from the 1981 Topps set

Where'd I get it? I got it signed at a Somerset Patriots game in 2008

How much did it cost? The card was probably a quarter; the autograph was free

In 2008, Hobson became the first manager for the Southern Maryland Blue Crabs and was recognized as the Atlantic League's Manager of the Year. This year, he took his team to the Atlantic League Championship Series, though they lost to the Somerset Patriots.

Hobson remains one of the most accessible and fan-friendly managers in the Atlantic League, even after all his years in independent baseball. I've never seen him turn down an autograph seeker, and he usually tries to make sure that polite children who ask for baseballs get them, at least on the road.

Hobson has a pretty nice autograph, though this looks like it was a somewhat rushed version.
Posted by Paul Hadsall at 11:00 PM

Everything about that card/auto is awesome.