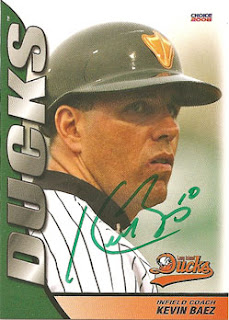 Who is this? Kevin Baez, a former infielder for the New York Mets

What is this? An autographed card from the 2008 Long Island Ducks team set

Where'd I get it? I got it signed before a Newark Bears game in 2008

How much did it cost? I think the team set cost around $8, but I don't really remember

Why is this so special? I remember Kevin Baez's brief major league career in the early 1990s. He had brief cups of coffee in 1990 and 1992, and a longer shot in 1993. He never really stuck, but you couldn't fault him for lack of effort.

Baez continued his career in the minor leagues and eventually independent baseball. If I recall correctly, he retired after the 2004 season with the Long Island Ducks and joined the team as a coach. He played a few games in 2005, but I think he was filling in because they were short-handed. He's great about interacting with fans before the game.

Baez doesn't have a bad autograph, but it's not as pretty as some of the older coaches and managers. I started to get this set signed in green to match the Ducks' team colors, but I lost my green Sharpie before I finished.
Posted by Paul Hadsall at 8:30 AM