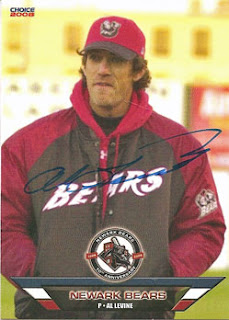 What is this? An autographed card from the 2008 Newark Bears team set

Where'd I get it? I wrote to Al Levine and asked him to sign it back in October; I got it back as an early present on Christmas Eve.

How much did it cost? The card was a gift and the autograph was free.

Why is this so special? Al Levine started the 2008 season as the Newark Bears' closer, but he retired just before the card sets came out last year.

I mailed him the card from my team set, hoping that he would sign it. But I guess no one from the team bothered to send him any copies of his card; he kept it and swapped me a signed regular issue card from earlier in his career. I mentioned this to an acquaintance at a Bears game this year. The next time I saw him, he brought me a copy of the card to try again.

Thanks to that kind gesture, I have one more signed card for my Newark Bears team set. Levine has a tiny signature with a lot of loops, but it looks kinda cool.

I don't remember seeing Levine pitch, except for the Bears last year. But over ten seasons, he appeared in 416 games. He has a lifetime record of 24-33, with an ERA of 3.96
Posted by Paul Hadsall at 8:30 AM