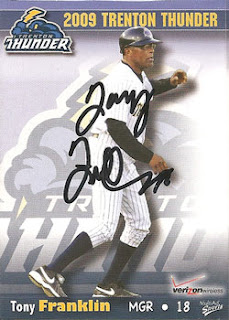 Who is this? Tony Franklin, manager of the Trenton Thunder

What is this? An autographed card from the 2009 Trenton Thunder team set

Where'd I get it? I got the card signed before a Trenton Thunder game this summer

How much did it cost? The card came from the 2009 Trenton Thunder team set, which was $10 in the team gift shop.

Why is this so special? Tony Franklin played for eight seasons in the minor leagues, but he never reached the majors. Since the 1980s, he's been a minor league manager in the Cubs, White Sox, Padres and Yankees systems.

In 2007, he got the job managing the Trenton Thunder, and he won back-to-back Eastern League titles in 2007 and 2008. Even though his team had a losing record in 2009, the Yankees announced this week that Franklin will be back for the 2010 season.

From everything I've heard from other autograph collectors at Trenton Thunder games, Tony Franklin does not particularly like to sign autographs. I would never have guessed that from my experience.

On a hot Sunday afternoon in late July, not very many players wanted to spend a minute more on the field than absolutely necessary. There was some sort of kids-only giveaway item, so there were even more autograph seekers than usual. So not too many players came anywhere near the stands, just a couple of relief pitchers and guys who weren't playing.

Franklin went out to check on his players during warmups, and then he went over to the rightfield corner stands. He started signing autographs, and he kept going as he made his way back to the dugout. It must have taken a good 10 or 15 minutes, but he signed for everybody who asked. Considering how many autographs he signed before he got to me, his signature looks pretty good, too.
Posted by Paul Hadsall at 4:31 PM

That is an interesting card. When I first saw it, I thought that it was a pocket schedule.

Nope, I didn't get any pocket schedules signed this year. I forget who was on the Trenton Thunder schedule this year, actually. I think it might have been Austin Jackson, and he was in AAA.