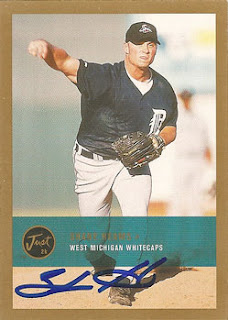 Who is this? Shane Heams, a former minor league pitcher and U.S. Olympic Gold Medal winner

What is this? An autograph card from the gold parallel of the 2000 Just minor league prospect set

Where'd I get it? I got the card signed at a Somerset Patriots game in 2005

How much did it cost? I got the card in a trade; the autograph was free

Why is this so special? Shane Heams was drafted as an outfielder by the Seattle Mariners in 1994, but he didn't hit. So the Mariners tried making him a pitcher, and it worked out fairly well. For most of his career, he averaged better than a strikeout per inning.

In 2000, Heams pitched for the U.S. Olympic Gold Medal-winning baseball team. He was not able to translate Olympic success into a major league career, though. He finished his professional career with the independent Somerset Patriots in 2005, retiring at age 30

Shane Heams was very good about signing autographs, but he was efficient. He simplified his signature to just "Sh H."
Posted by Paul Hadsall at 8:45 PM