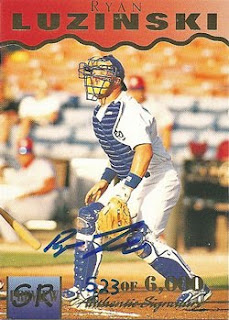 Who is this? Ryan Luzinski, a former minor league catcher

What is this? An autograph card from the 1995 Signature Rookies Preview set

Where'd I get it? I don't really remember. I have a ton of 1995 Signature Rookies cards, so I think I bought a lot of them somewhere along the way.

How much did it cost? No idea, but it couldn't have been much.

Why is this so special? Ryan is the son of former Phillies slugger Greg Luzinski. The New Jersey native was the first round draft pick of the Los Angeles Dodgers in 1992. He played professionally for eight seasons, but never reached the majors.

I've always wondered if Signature Rookies made the players number the cards as they signed them.
Posted by Paul Hadsall at 11:21 PM

I have wondered the same thing.