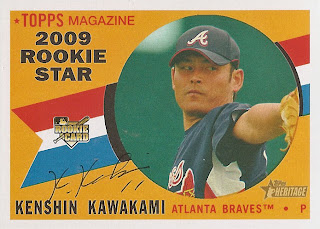 Who is this? Kenshin Kawakami, a pitcher for the Atlanta Braves

What is this? An autographed card from the 2009 Topps Heritage High Number Series

Where'd I get it? I wrote to Kawakami at the Braves' spring training camp and asked him to sign it. I got it back on Tuesday

How much did it cost? The card was about fifty cents, plus postage

Why is this so special? Kawakami had a decent, if not spectacular season for the Atlanta Braves last year. He started 25 games and appeared in seven more out of the bullpen. He finished the season with a 7-12 record and a 3.86 ERA. He also earned one save, by pitching four scoreless innings against the Mets in an 11-3 victory on Sept. 21. I was at that game.

In 2004, he had the best season of his career - 17-7 with a 3.32 ERA. He helped the Dragons to win a Central League title, was named the league MVP and took home the  Eiji Sawamura Award given to the best pitcher in Japan. He also threw a no-hitter.

In 2006, Kawakami again won 17 and helped the Dragons to another Central League title.

Kawakami signed a quick version of his English signature in ballpoint. Fortunately, he was able to find a fairly light spot to sign the card so the signature is pretty visible.
Posted by Paul Hadsall at 12:09 AM

That looks pretty good for ballpoint.

Nice autograph, at least it's a bit longer than Uehara's Koji 19.

It's a very nice signed card... I'm just glad I didn't send in the 2010 Upper Deck card I was considering -- if he signed it the same way, you'd probably never see the autograph.