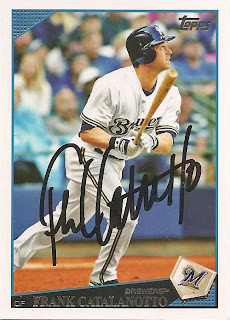 Who is this? Frank Catalanotto, a utility player trying to win a bench spot on the New York Mets

What is this? An autographed card from the 2009 Topps set

Where'd I get it? I wrote to Catalanotto at Mets camp and asked him to sign it. I got it back today.

How much did it cost? About a dollar for the card and postage.

Why is this so special? Frank Catalanotto started playing professional baseball in 1992, back when George H.W. Bush was President, Microsoft was introducing Windows 3.1 to the world, and Jay Leno was beginning his run on the Tonight Show.

He's signed thousands and thousands of autographs since then, but he's still willing to take the time to scribble his name on cards that people mail to him. That's pretty amazing.