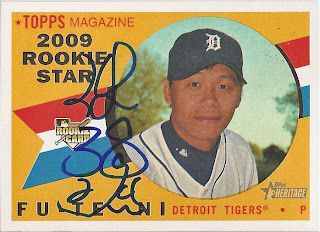 Who is this? Fu-Te Ni, a relief pitcher for the Detroit Tigers

What is this? An autographed card from the 2009 Topps Heritage High Numbers set

Where'd I get it? I wrote to Ni at the Tigers' spring training camp and asked him to sign it. I got it back on Saturday

How much did it cost? I think the card cost about a quarter last fall.

Why is this so special? Fu-Te Ni is the sixth player from Taiwan to appear in a Major League Baseball game. He began his professional career with the Chinatrust Whales in 2007, but signed a minor league contract with the Tigers in 2009 after the Whales disbanded.

Ni was called up to the majors in June when Nate Robertson was injured, and he pitched well. He appeared in 36 games, striking out 21 in 31 innings and finishing with a 2.61 ERA.

I didn't see him pitch until the 163rd game of the season, the one game playoff between the Tigers and the Minnesota Twins. With the Tigers down 4-3 in the seventh inning and Joe Mauer on first base with one out, Ni came in to retire Jason Kubel to keep the Tigers in the game.

I'm not sure what's going on with Ni's signature. It's not English, but it doesn't look a lot like the traditional Chinese version of his name - 倪福德 - either. It's one of the more unique autographs I have in my collection.