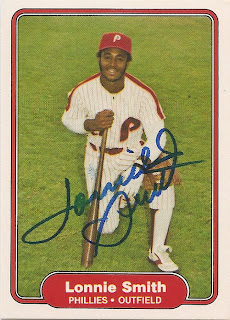 Who is this? Lonnie Smith, a former outfielder for the Philadelphia Phillies, St. Louis Cardinals, Kansas City Royals and Atlanta Braves

What is this? An autographed card from the 1982 Fleer set

Where'd I get it? I wrote to Smith a couple of weeks ago and asked him to sign it.

How much did it cost? Just postage.

Why is this so special? Lonnie Smith was a member of the 1980 World Series Champion Phillies. Though he was only a part time player, he had a good enough season to finish third in the Rookie of the Year balloting. Smith hit .339 with 3 home runs, 20 RBI and 33 stolen bases in 100 games.

Smith was traded to the St. Louis Cardinals before the 1982 season. He had an All-Star year for his new team, hitting .309 with 8 home runs, 69 RBI and 68 stolen bases. He led the league with 120 runs scored.
Smith had another good season in 1983, but his star was beginning to fade by 1984. He soon found himself on a new team, the Kansas City Royals.

Lonnie Smith has a surprisingly neat autograph, though this one is a little bit smudged. You don't see that too often on 1982 Fleer cards.
Posted by Paul Hadsall at 11:25 PM

That has got to be the best looking photo I have seen on an early Fleer card. That was a good choice for getting signed.

Those early Fleer sets did have some decent photography, but it was lost in among all of the horrible shots.

I'm curious how they obtained the photos that were used -- I wonder if they were taken by pros with professional equipment or if they were the work of enthusiastic amateurs.