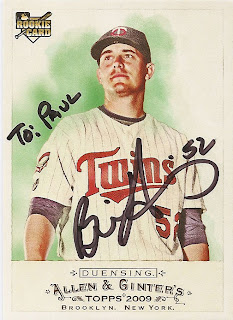 Who is this? Brian Duensing, a pitcher for the Minnesota Twins

What is this? An autographed card from the 2009 Allen & Ginter set

Where'd I get it? I wrote to Duensing at Twins' spring training camp and asked him to sign it. I got it back on Saturday.

How much did it cost? The card cost about a quarter last fall.

Why is this so special? Duensing was part of the bronze medal-winning U.S. team in the 2008 Olympics, the final time the baseball would be a medal sport.

Duensing had a 5-2 record with a 3.64 record in his rookie season with the Twins in 2009. He split time between the bullpen and the starting rotation, and he helped the Twins reach the playoffs.

Because Scott Baker had to pitch in the 163rd game of the regular season to determine if the Twins or Tigers would be advancing to the post-season, Duensing got to start the ALDS against C.C. Sabathia. It was the only time I saw him pitch last season. Duensing did well enough the first time through the order, but he looked overmatched once the Yankees had gotten a look at his stuff.

Hopefully he will be part of more Twins' success in 2010.

This is the first personalized baseball card autograph I've gotten in a while. That's pretty cool.
Posted by Paul Hadsall at 8:30 AM