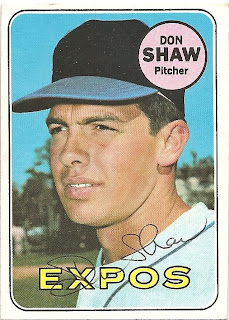 Who is this? Don Shaw, an original Montreal Expo

What is this? An autographed card from the 1969 Topps set

Where'd I get it? I wrote to Shaw and asked him to sign it for me earlier this month. I got it back today.

How much did it cost? Around a dollar for the card and postage costs

Why is this so special? Don Shaw's major league career wasn't spectacular -- he played for four different teams over five season, appearing in 138 games and earning a 13-14 record with a lifetime 4.01 ERA.

He has a unique claim to fame - he won the very first game in Montreal Expos history. The victory came at the expense of his former team, the New York Mets, on April 8, 1969.

The card is another great example of the Topps airbrushing skills common in the 1960s and 70s. Shaw was number 182 that year, so there weren't any photos of players in Expos uniforms when it was produced. I wonder if the card company even knew what the hats would look like.

Instead of showing Shaw's blue Mets cap, the airbrush artists decided to black everything out but the bill. If they'd only left the orange NY logo, we'd have the forerunner of the Mets' current alternate cap. :)

Shaw has a small, quick signature. It's easier to read on a lighter background, but his first name gets a little lost here because he signed in ballpoint.
Posted by Paul Hadsall at 7:28 PM