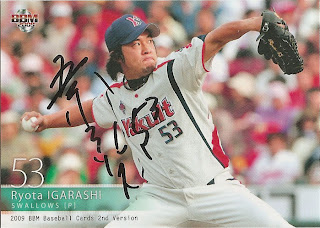 Who is this? Ryota Igarashi, a relief pitcher for the New York Mets

What is this? An autographed card from the 2009 BBM Second Version Japanese baseball card set

Where'd I get it? I've been buying up Ryota Igarashi's cards on eBay since the Mets signed him. I mailed a couple doubles to the Mets' spring training camp to see if Igarashi would sign them, and I got them back yesterday.

How much did it cost? I'd guess around $2 for the card and postage.

Why is this so special? Ryota Igarashi had a solid career in Japan, pitching for the Yakult Swallows for ten seasons. He won 45 games while losing 26 and saving 54 in 466 appearances.

Igarashi decided that he wanted to see how he could do in the majors and he signed a two-year contract with the Mets this off-season. Thanks to some stories on Yakyu Baka, an English-language Japanese baseball blog, I became a fan before I ever got to see Igarashi pitch. (YouTube video clips don't really count.)

Igarashi reportedly wanted to sing "God Bless America" during his introductory press conference. Unfortunately, the Mets spoiled the fun there -- they only set up a conference call.

And he seems like a real character. Adam Rubin of the Daily News discovered that Igarashi would put on a lucha libre-style mask to take on the character "Swallows Man" when played in Japan.

I really hope that he is able to adjust to pitching in Major League Baseball... I think Igarashi will be a lot of fun to watch if he's successful.

I'm not sure if Igarashi has come up with an American version of his autograph yet, but I'm happy I got the Japanese version. I may not be able to read it, but I'm sure that someone could. That's a big improvement from the illegible signatures of many current players.
Posted by Paul Hadsall at 12:10 AM

Nice. You sure didn't waste any time on this one.

Next, I'll have to try Hisanori Takahashi. I have a card to send, but I'm going to wait until the season starts.

Nice! Glad you got this one! I love the Japanese sigs personally!