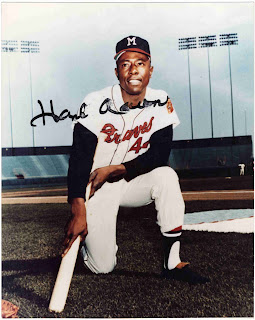 Who is this? Hank Aaron, Home Run King.

What is this? An autographed photo of Hammerin' Hank.

Where'd I get it? Atlanta Sports Cards in the late '80s.

Why is this so special? Everybody knows who Hank is, so I'll tell you how I got this thing. The card shop I went to as a kid was Atlanta Sports Cards in the Green's Corners shopping center on Jimmy Carter Boulevard. I got my vintage collection started with their commons, bricks and bargain bin cards. I usually had no more than ten or twenty bucks to spend when I went there so big purchases were rare. One day when I was there they had a stack of autographs for sale. They had either done a big signing session with Hank or had purchased it from someone who had. They had a bunch of signed Aaron photos there for premium prices that were out of my range, but the guy behind the counter showed me some 'rejects' they had cheap. There were the photos that were smudged, or marked or where the autograph just looked weird. I'm pretty sure they were selling them for eight bucks each, but my brain refuses to believe that a Hank Aaron autograph could ever have been priced with only one digit so let's say ten to keep my mind happy. This was probably a really big chunk of my cash on hand, and when you take into consideration that there was an arcade full of video games calling me downstairs it might have taken most of my card money for the day. Even so it was the biggest no-brainer I ever had to buy that photo. I looked through the pictures and found one that was reasonably unsmudged (although I really didn't give a flip about the smudging since it was an autograph of HANK) and looked through the cheap boxes for cards that day. This photo currently is stored away with this.
Posted by dayf at 9:01 PM

This is kind of like my Dizzy Dean autographed photo. I went to the Dizzy Dean museum when I was 6 and was in awe of the man. Even though he had passed away 6 years earlier it seemed like he was there through the displays, audios and my grandpa's stories. And I got a cool auto of him at the gift shop for five dollars. He is smiling and wearing a cowboy hat and plaid shirt. People always ask what actor it is when they first see it. Try finding one now.