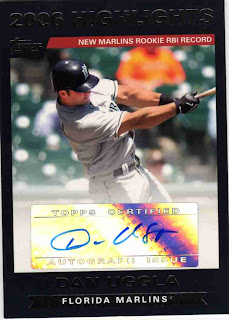 Who is this? Marlins second baseman Dan Uggla.

What is this? An autograph card from 2007 Topps, card number HA-DU.

Why is this so special? I love Wikipedia. You see, I thought I knew Dan Uggla, but I didn't know nothin. I knew Dan as the Rule V castoff with a funny name that came out of nowhere to be an All Star in 2006. I knew him as the blue collar player who came in third to super hyped prospects Hanley Ramirez and Ryan Zimmerman in the Rookie of the Year vote. I knew him as the guy passed up in fantasy drafts in favor of Alfonso Soriano and Chase Utley and Robinson Cano who still hit 30 homers last year.

I didn't know that his name means "owl" in Swedish. I didn't know he broke Joe Gordon's record for most home runs by a rookie second baseman. I didn't know he won the Player's Choice and Sporting News Rookie of the Year Award over his blue chip rivals. He's never going to lead Beckett's Hot List, but Dan's the kind of player you want on your team. His simple, to the point signature belies his workman like attitude. Plus his name is fun to say. 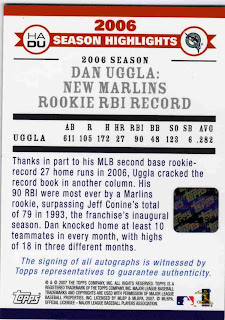 How much are you selling the card for?