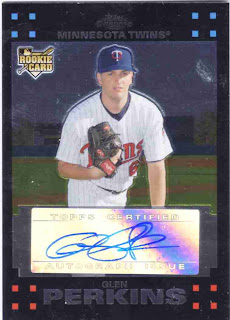 Who is this? Twins pitcher Glen Perkins.

Where'd I get it? Flea market binge.

Why is this so special? This guy's rookie cards were all over the place a couple of years ago and the name stuck with me. He's still a decent prospect for the Twins, but he's started the year in Triple-A. Glen is a homegrown Twins prospect, he was born in St. Paul and went to college at the University of Minnesota. He's throwing well so far in the minors and might get a call up sometime this year, especially since he's a lefty and they're hard to come by. Then again, he might suck and never sniff the majors again, who knows? It's a chrome auto of a legit prospect so what the heck. It's a sticker auto, and the signature kinda looks like a doodle some guy would draw while talking on the phone, and I got a fingerprint or a smudge or something up on the corner but it was in the 4 for $10 box so rock on. Remember, this was the big hit in a box of Chrome for some guy. 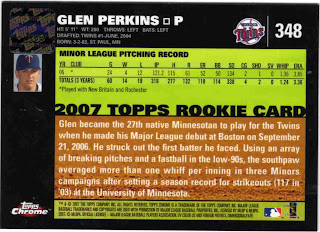