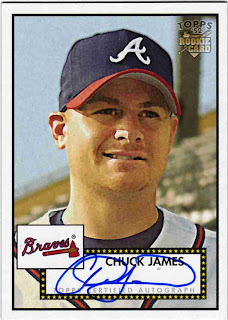 Who is this? Braves pitcher Chuck James.

Why is this so special? I got this card and tomorrow's card from the same seller. Gotta love combined shipping! Chuckie's apparently not a popular signature right now, because I got him for the opening bid. I like the card though. It looks good even being on the overdone '52 design and the signature itself looks fantastic. Chuck used every last millimeter of that box for the autograph and till made it look good. Good for you Chuckie!

Now obviously since it's a Brave I like the player, but Chuck is especially cool. He seems like a happy go lucky guy and has the typical lefty crazies. After his successful rookie season he admitted in a radio interview to everyone's horror that he spent the offseason working for Lowe's installing windows and stuff. Needless to say after two 11-win seasons, he's not working for Lowe's anymore. James is currently on the DL resting a rotator cuff injury but is expected to come off it quickly to take the brittle Mike Hampton's spot in the rotation. Chuck is a solid pitcher but he's got a reputation for only being able to go 5 effective innings. With the abundance of starting pitchers in the Braves' organization right now, Chuck is going to have to earn his job, but has the talent to stick in the rotation. 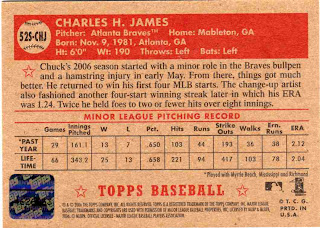 Keep up the good work.