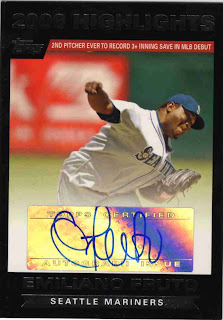 Who is this? Mariner relief pitcher Emiliano Fruto.

What is this? An autograph card from 2007 Topps, card number HA-EF.

Where'd I get it? From Jesus guy on eBay.

How much did it cost? I'd have to do math to tell you for sure, so let's just say two bucks, mmmmkay?

Why is this so special? This is the autograph card I talked about in this post. While I was specifically looking for Goudey cards on my eBay binge, this card here was the one that made me bite on the auction. Now why would I want a card of an obscure Mariners reliever? Well the name is cool.. say it out loud. Emiliano Frrrruto! Make sure you rrroll the Rs for full effect. Plus he's the second guy to ever pitch a 3 inning save in his debut. Didn't know you could get a save by coming into the game with a lead, pitching three innings and finishing the game without giving up the lead did you? Well thanks to this card, now you do! Ok fine, it's not that great a card and I shouldn't be allowed near a computer when I get into a bidding craze. Let's see who this guy is, shall we?

Fruto was signed at sixteen years old out of Colombia by the Mariners. He worked his way through the minors to make his debut in 2006, then the M's shipped him off to the Nationals in the Jose Vidro deal. I just found out that Chris Snelling was also in that deal. There's a can't miss prospect that missed, but I digress... Emiliano pitched pretty badly for Triple-A Columbus before getting swapped to the D-Backs at the deadline. He's back in Triple-A. but he's still young and has a decent fastball so there's a chance he'll get back to the majors as a reliever. So, not the best card, but he's got an awesome name. You can't deny that. The signature's pretty nice too, Emiliano doesn't let the sticker confine him and he just lets it flow. A nice loopy E is followed by a distinct F, the R and U loop together and the TO ties it all together. Bad card, good signature, and that counts for something. 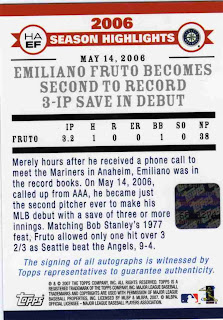