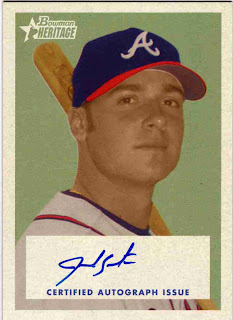 Who is this? Braves catcher Jarrod Saltalamacchia.

What is this? An autograph card from 2006 Bowman Heritage, card SG-JS.

Where'd I get it? Same eBay seller as the Chuck James.

Why is this so special? When I was ripping piles of Bowman Heritage in the winter of '06-'07 (and spring... and summer... and fall... this stuff didn't move off the shelves too fast) this was the autograph card I most wanted to pull. Once the MLB Draft started being updated live online, I had gotten into the habit of obsessively hitting refresh on the page at work to see the Braves' picks. I remember the pick of Salty in the 1st round in 2003. That was a pretty good draft, 4 years later and over half the first rounders are in The Show. Jarrod stuck with me as a player to watch (and with that name it's hard to forget it) and when Javy bolted to the Orioles, he seemed like he could one day be the catcher of the future. In 2005 Johnny Estrada got hurt, Brian McCann got called up and played like he was a veteran. At that moment, Jarrod got hopelessly blocked in the Braves organization and the trade rumors started swirling.

Stuck behind McCann, Cuban prospect Brayan Pena and a multitude of veterans brought in year to year as a permanent backup, Jarrod was stuck but kept hitting in the minors. Last year he got his chance when both McCann and Brayan Pena got hurt and the Braves needed someone who could play behind the plate every day. He played well, and the Braves tried him out at first base since the Scott Thorman experiment bombed so badly. When the trading deadline came up, the Braves made a move and sent Salty and a truckload of other prospects to Texas for Mark Teixeira. Mark has hit like a beast ever since he put on a Braves uniform, but giving up Salty still hurts. the Braves have the early advantage on the trade, as Jarrod lost the starting job in Texas to Gerald Laird and got sent to triple-A. Next year things could swing the other way though as Mark is going to want a rather huge contract and Texas can't keep Saltalamacchia's bat out of the lineup forever.

It's a big reflection on the state of the hobby where two autograph cards can be picked up for less than the price of the packs they came in. Chuck James and Saltalamacchia aren't really household names or anything, but they are young players who have actually played in the bigs and have a bright future if they stay healthy. Stuff like this is really making me rething the wisdom of mindlessly ripping the latest product looking for hits when the ones I really want are usually in the bargain bin. I'm not really a prospector, but I'll bet this card is worth more than four bucks in a few years. The actual signature is interesting though. Jarrod opts for the minimalist kanji style of autographs. It's like a miniature Zen Garden in blue ink. I envisioned Jarrod having a huge bold John Hancock like signature, but now that I think about it with twenty letters in your name simple is best. 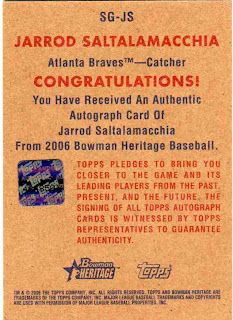 I also just learned that Jarrod's daughter's name is Bunter. Whatever you do dude, please don't name your next child Homer.
Posted by dayf at 8:02 PM