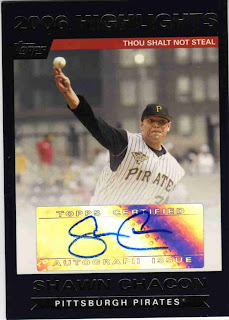 Who is this? Pirates pitcher Shawn Chacon.

What is this? An autograph card from 2007 Topps, card number HA-SC.

Where'd I get it? Flea market during a buying binge.

Why is this so special? Shawn's not a great pitcher, but he's a decent one. I have a fondness for pitchers who come out of nowhere to save 30 games for a team like Shawn did for the Rockies in 2004. Ok, so he also went 1-9 with a 7.11 ERA, but he got some guy a bunch of saves for his fantasy team! Shawn is one of the few major leaguers born in Alaska, and was adopted by family in Colorado when he was four, and was later drafted by the Rockies. He was an All Star for the Rockies in '03 and pitched well for the Yankees in 2005. He was traded to the Pirates in '06afte a rough start and mostly pitched relief for them last year. He is now making a comeback as a starter in the Astros rotation. The cryptic biblical message on the front of this card refers to his streak of 85 1/3 innings pitched without a stolen base. It's also a warning to anyone who wants to filch my autograph of Shawn. Keep your hands off my card, ya thief! 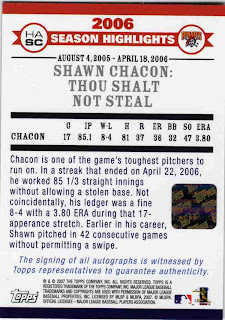