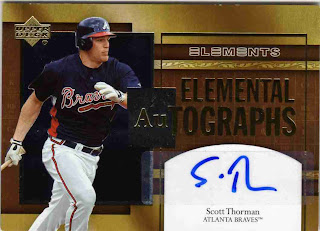 Who is this? Braves first baseman Scott Thorman.

What is this? An autograph card from 2007 Upper Deck Elements.

Where'd I get it? Flea market dealer.

How much did it cost? Four bucks.

Why is this so special? Well, it's a Brave so it's worth the four bucks to me if not anyone else. It's funny how one roster mistake can start a chain reaction of screw ups. Smoltz moves from the closer spot back to the rotation, which turned out to be a good move. He was replaced by Danny Kolb, which most decidedly was not. Our solid set-up man, Chris Reitsma, replaced Danny and Chris couldn't hack it either. Now we have no setup man or closer so Schuerholtz trades for Bob Wickman, who we should have signed in the first place. Bob is fat and old so we go out and get some relievers to protect against the inevitable collapse. Adam LaRoche is a solid first baseman, but Scott Thorman is waiting in the wings and the organization decides Adam is expendable. LaRoche goes to Pittsburgh for Mike Gonzalez who ends up hurting his arm. Thorman was supposed to replace Adam LaRoche at first, but neither his bat nor his defense was anything close to Adam's production. Thor can hit the longball, but hovered around the Mendoza line while hitting them. Now we have no first baseman, a fat cantankerous closer and a lefty getting Tommy John surgery. If Bill Bavasi wasn't dumb enough to trade Rafael Soriano for Horacio Ramirez things would be really bad. Luckily the scouting department is better at evaluating the draft than evaluating closers, so we had a farm system stocked enough to snag Mark Teixeira from the Rangers. So when it was all said and done, the Braves went from Russ Ortiz in the rotation, Adam LaRoche at First and John Smoltz as the closer in 2004, to Smoltz in the rotation, Teixiera at First and Soriano as the closer today. I'm going to go out on a limb and say that ended up being a net improvement. It just took a really strange and terrible path to get there with Thorman being a key step along the way.

It eventually worked out for the Braves, but it's not working out for Thorman. He's now hopelessly blocked by Teixeira to the point where he doesn't even merit a spot on the roster as his backup since Tex never misses a game. However, since Mark might bolt for greener pastures at the end of the year the Braves can't trade him either since he might be next year's starter by default. So now he's stuck in Richmond, where he has one hit in 21 at bats. Poor Thor. This card is as big a mess as his career. First of all, the card is a pun. Upper Deck Elements... it's got gold foil... so we call it Au tographs... because the atomic symbol for gold is Au.... and gold is an element... clever eh? No. It isn't. It was old and trite in 1996. And there's too much foil on the thing. And the design is lazy, the back looks exactly like the front. The stupidest design decision was to make the autograph sticker wider than the space for the autograph to go. Luckily Scott has a bizarre signature that doesn't take up too much room and stays in the white space. I can kind of see where Scott is going with his signature. There's an S, then a dot, which rhymes with cott, so you have Scott. Okay, fair enough. then he starts the T but gets bored with it all on the crossbar and just squiggles a wavy line instead of horman. As a result, it's more of a doodle than an autograph and I can't look at it without seeing a crude line drawing of a woman's face. It's an optical illusion too, look at it one way and the woman is looking at Scott, look at it another way, and she's staring straight at you with her bangs covering her left eye. So he lost his job, is stuck in Triple-A and has a goofy looking signature. Poor Thor. 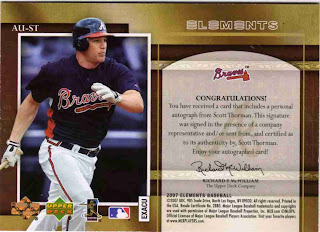