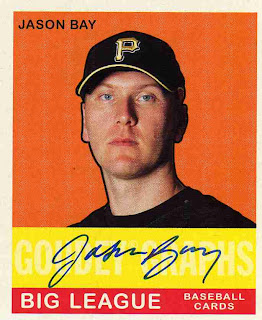 Who is this? Pirates outfielder Jason Bay.

What is this? An autograph card from 2007 Upper Deck Goudey, card GG-JB.

Where'd I get it? A hobby pack.

How much did it cost? 5 bucks for the pack.

Why is this so special? When Goudey came out last year, I was in my "Upper Deck Sucks" period and I didn't want to give them any of my money at all. However, the shop I frequent had a promotion - buy $20 worth of Upper Deck packs and you get a ticket for an autograph signing by Braves rookie, Yunel Escobar. Now, this was a real quandry. I wanted the auto, but there was absolutley nothing out by Upper Deck that I was even remotely interested in. The base set sucked, I wasn't interested in all the high end crap and I was much more interested in buying up as much Allen & Ginter as I could. I wasn't going to get another good opportunity to in an in-person signature though, so I resigned myself to getting 4 packs of Base UD and rationalizing it as getting a guaranteed hit in the packs. Lord knows, the base packs weren't going to give up any normal hits, I bought 4 packs that year and got one lonely retro '89 insert. Great value there...

Signing day was coming up and I noticed that Goudey was scheduled to hit the shelves about the same time as the autograph session. I love retro crap, so I figured that would be a better waste of my twenty bucks than the base set. I was apprehensive about how it would look, Upper Deck's first Play Ball set was utterly fantastic, but their follow up the next year was possibly one of the ugliest sets ever made. So would Goudey be 2003 Play Ball or 2004 Play Ball? I didn't have to worry because it was actually 1934-36 Diamond Stars, which was an excellent thing. I got my Yunel auto (and as soon as I get a digital camera that doesn't take pictures that all look like Jimmy Hoffa's last known photograph, I'll show it off), I got four packs of a really good product and my hatred of Upper Deck was lessened, albeit briefly. On top of all that in the very first pack I ripped I pulled the auto box hit, so I ended up with two autographs for the price of one. It cost me in the long run though, as now I have a binder full of Goudey cards and a pile of doubles big enough to choke a mule.

Jason is pretty much the cornerstone of the Pirates' franchise, for whatever that's worth. He's a fantastic outfielder who won the Rookie of the Year award in 2004, in a rout over Khalil Greene. He is a two time All-Star including the 2006 game that was held in Pittsburgh. Last year was injury filled and Jason had an off year, but he's entering his prime years and should bounce back. Jason kind of bit me last year in my work fantasy league. He came off the DL just in time for my championship matchup game. My outfield had been a mess all year and I was rotating mediocre players in and out all year. Jason was available, I wanted an edge to help me win the crown and I wasn't happy with my rightfielder so I picked him up. Jason went on to have an abysmal couple of weeks and the guy I dropped, Brad Hawpe, was on absolute fire as the Rockies came back to win the wild card. Oops. Work fantasy leagues have been kiboshed, so there will be no redemption for me. The signature's pretty though, but I'm not crazy about the orange. 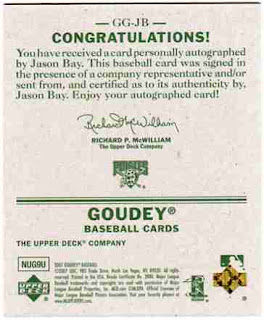 Jason Bay is cool. Why? Well, #1, he's canadian... #2, he plays with Adam LaRoche. And that makes him incredibly cool.

I'm gonna start a blog about the 6 degrees of Adam LaRoche...