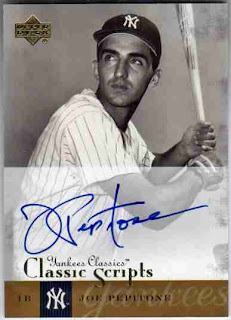 Who is this? Yankees first baseman Joe Pepitone.

What is this? An autograph card from 2004 Upper Deck Yankees Classics , card number AU-38.

Where'd I get it? From a card shop, but I don't remember which one.

How much did it cost? A few bucks at most. Let's say five.

Ok, Holly's back online and things are (more or less) calmed down. Now, let's talk about Joe here.

The Braves are my team, and they always will be. I like 'em all, from Boston to Milwaukee to Atlanta. Every team from when Harry Wright was in charge of the club, to the Frank Wren era. The Bravos will always be my #1 love in baseball. That's not to say that there aren't other teams I like. I have relatives in Pennsylvania that got me interested in the early 80's Phillies with Lefty, Schmidt and Rose. I had a lot of '81 Topps cards and they were the Worlds Champs, it said so right on the card. I also loved the White Sox of the early nineties. Black Jack, Big Hurt, Pudge, Bo, Rock, One Dog, Robin, Ozzie, Joey and those slick black caps. One of the biggest disappointments in sports is when we ended up with a Phillies vs Blue Jays World Series instead of my Braves/Sox dream matchup. The first team that fascinated me though was the Yankees.

I knew and loved Hammerin' Hank at an early age, and Hank is forever associated with Babe Ruth. I found that I liked Babe just as much as Hank and got really interested in the powerhouse teams of the 20's. Gehrig, Lazzeri, Hoyt, Dickey, Lefty, Meusal. Then DiMaggio showed up and brought Heinrich, Crosetti and King Kong Keller. Now it's the 50's and you have the Mick, Whitey, Scooter, The Big Cat, Allie, Larson, Elston. And don't forget Yogi, who's practically my spiritual adviser. Then the Bronx Zoo gets thrown on top of all that crazy good baseball history. One of my first baseball memories was Reggie hitting three freaking home runs in the World Series. That really impressed this five year old. I know Red Sox fans out there are puking their guts out right now, but hey, I'm from Atlanta. The only Yankees I have any reason to have animosity towards are Grant and Sherman. Ok, I'm not fond of Leyritz either. But I have nothing against the '99 club that whipped our ass, they were just the better team. I'm a baseball fan who loves baseball history, and the Yankees are just stinkin' with history.

Part of that fascinating history is how the mighty Yankees crashed and burned in the late 60's. My theory is is was payback for firing Yogi. Who fires a manager after losing game 7 of the World Series (to Bob Gibson, no less) anyway?? You'll notice they burned again after firing Yogi a second time in '85, but I digress. A non-supernatural reason could be because a lot of the young studs that came up to the Yankees in the sixties just couldn't quite replace all the retiring legends from the 50's. One of those almost superstars was Joe Pepitone.

Joe was a bonus baby with a great glove and some serious pop in his bat. His arrival forced the Yanks to trade long time first baseman Moose Skowron to the Dodgers ( a move that really bit them in the ass in the 1963 World Series, but that's another story). Joe was productive for the Yankees and was an All-Star and Gold Glover while hitting a bunch of home runs in New York. Joe was a very popular player in New York, and is kind of an underrated player. He's more well known today for his carousing in New York nightclubs then for baseball. Joe gets a lot of ink in Jim Bouton's Ball Four, and Joe wrote an autobiography that goes over a lot of his extracurricular activities while in baseball that held him back from being the player he could have been. He was traded to the Astros in 1970, again to the Cubs that same year and finished his Major league career with three games as a Brave in 1973. He also had a disastrous stint with a Japanese club in '73 and became synonymous with a high profile bust in Japan. Joe also got into some legal trouble after his playing days were over, but has been walking the straight and narrow for a while now. Joe has been mentioned in Seinfeld and Curb Your Enthusiasm and is a big autograph signer now. One of those autographs is right here on this card, and it's a nice one. That's one classy signature, perfect for a young Yankees superstar in the 60's. 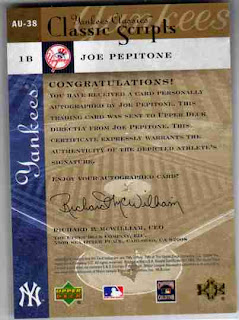