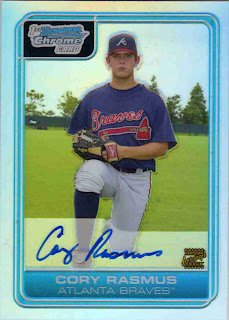 Who is this? Braves prospect Cory Rasmus.

Where'd I get it? In a trade with Chris Harris from Stale Gum.

How much did it cost? A 2000 Donruss card that may or may not exist.

Why is this so special? This is another autograph card I picked up from Chris Harris in the big 2001 Donruss trade we made. This card here was the one that finally pushed me over the edge. I was a little hesitant to trade off the CC Sabathia Redemption card Chris coveted, but a shiny chrome refractor of some prospect with a bum arm finally pushed me over the edge. It is a very nice very shiny card and it is my first autographed refractor so at least in ten years when Chris is buying a house with his ultra-rare CC card, I'll be able to stare deeply into the rainbow reflectiveness of this card and mesmerize the bad thoughts away.

There isn't a whole lot of info out there on Cory, not surprising since he missed all of last year with a bad shoulder. He is the brother of Cardinals' phenom Colby Rasmus, and supposedly is equal in talent. A 97-mph fastball prompted the Braves to develop the pitching talent instead of the bat. The lost year notwithstanding, the Braves' farm system definitely needs more arms than bats, so this may have been a good move. If it doesn't work out, maybe they can pull an Ankiel and get that bat working. He was also on the 1999 Phenix City, AL Little League World Series Team with his brother which is kinda cool. This isn't exactly a Joba Refractor auto, and I probably could have picked this card up for a couple bucks if I tried, but Chris got what he wanted and I got what I wanted so the trade is a good one in my eyes. With any luck Cory will be pitching in Rome this year and I'll get a chance to go watch him pitch. Hey, maybe I can get this card autographed! Ok, maybe not. I'll buy a team set at the gift shop and get that signed instead. 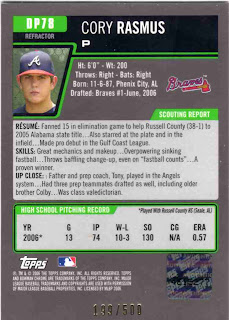