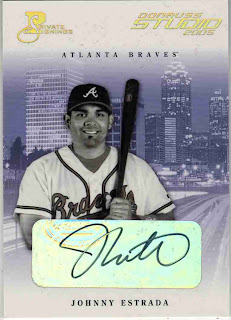 Who is this? Braves catcher Johnny Estrada.

Where'd I get it? In a trade with Chris Harris.

Why is this so special? Johnny was only on the Braves for just over two years but he's one of my favorites. Johnny was a key piece in the Braves' 2003 offseason disaster that saw Tom Glavine bolt to the Mets in a huff, Greg Maddux accept arbitration out of nowhere and Kevin Millwood traded as a salary dump for magic beans. Estrada turned out to be those beans. In 2003, Millwood was pitching a no-hitter for the Phillies while Estrada was in Richmond, unable to knock Henry Blanco out of the backup catcher's job. The next year, Millwood was on the DL while Estrada took over for Javy Lopez after he signed with Baltimore for a zillion bucks. That year he went nuts offensively and ended up winning a Silver Slugger award. It looked like Estrada would be the Braves' backstop for a while, at least until the Angels' Darren Erstad decided to give him the Ray Fosse treatment in a play at the plate. Estrada got knocked into a parallel dimension and some kid named McCann had to be called up to take over. That pretty much ended his Braves career and he has bounced around between Arizona, Milwaukee, the Mets for about five minutes and now he's trying to win a spot on the Nationals' bench. I'll always remember him as the silver lining in that cloudy offseason.

The card itself is one of the more understated Studio designs. A black & white portrait on top of a tinted time-lapse photograph of the home city's skyline. This card shows the I75-I85 connector in downtown Atlanta heading south to Turner Field. One of those blurs might have been my car. This card was acquired in a Trade with Stale Gum's Chris Harris, in a blockbuster that will be discussed on my main blog later this week. There's two more cards coming up from Chris whenever I get around to it this week. This card was actually Chris' choice, I told him to pick between this one and some Bowman Chrome prospect I hadn't heard of before and he chose to keep the Chrome. Works out fine for both of us actually, he'll probably be able to trade that one off to a Chromie pretty easily if he wants to and I got a Brave with actual Major League service time. The autograph itself is pretty cool, Johnny opts for an "all in one stroke" approach to his signature. Too bad the shiny sticker doesn't fit the design of the card in the slightest. This card is also serial numbered to 50, which as Chris and myself have both discussed recently, means absolutely nothing anymore. 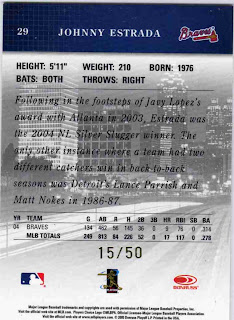