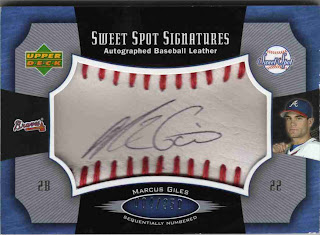 Who is this? Braves second baseman Marcus Giles.

Where'd I get it? Flea market dealer.

Long version: There's a card dealer that comes to the local flea market once a month or so. He used to come every weekend, but a few years ago this area started building up quickly. Another flea market down the street was condemned, sold, and turned into a SuperTarget shopping center. The local crooks county officials set their sights on the flea market he had been selling at for years and got it shut down one winter due to zoning violations or some such thing. The owners fought back and make all the improvements that they were required to do to keep from getting shut down permanently. The pols lost their new strip mall and the dealers lost a Christmas season of selling. A lot of the regulars stopped coming and last year they guy quit coming every week, instead cutting back to once a month.

It sucks that he doesn't come around all that often anymore, the guy is a fantastic dealer. He always has lots of stuff. Inserts, autos, relics, wax and something a lot of dealers don't even bother with anymore, commons. Lots of commons. Cheap ones too - you won't pick out a bunch you need to a set and then get a whopping bill for them. During the winter he blows out a lot of stuff too. New commons for a nickel apiece. Junk commons for a penny apiece. Junk wax three for a buck. You can go there with twenty bucks an leave with a massive pile of cards. You just never know when he'll show up now.

A day after I bought my 2008 Heritage (which is increasingly turning into a debacle) I got an e-mail from him stating he would be there the next Saturday. Oh great, I just blew all my cash and the best dealer in town is making his last appearance before the season starts. I scraped up some loot anyway and made my way to the flea market this weekend. I got a moedest haul, a handful of odd wax packs, a couple boxes of dreadfully old gum, a pile of 1981 Topps I needed for my set, a bunch of cheap Braves and inserts. The tough choice I had was down to my last purchase of the day. I had about 8 bucks left and I had to choose between a box of '88 Score and this auto card. I just wrote a bunch of stuff in conjunction with Wax Heaven on 88 Score and I kind of wanted to rip a box, but the lure of a Sweet Spot auto was too great. A week earlier or later and I would have walked away with both and a dual auto of Chuck James and Anthony Lerew. Oh well, maybe next time.

Giles was the star second baseman for the Braves up until last year. He was a fan favorite who fit nicely in the 2-hole with his average and doubles power. After an all-star year in 2003 though, his stats started to slip while his salary started to rise. Last year, faced with a 6 million plus contract in arbitration, the Braves first tried to trade Gilly to the Orioles (kiboshed by the meddling Angelos) and finally just had to non tender him outright. This was a tough shock for the fan base already restless from missing the playoffs mainly due to Time Warner's tight purse strings choking the payroll. Giles signed with the Padres and joined his big brother Brian while the Braves relied on a rookie outfielder who never played the position. Somehow the stars aligned for the Bravos, Giles was a flop in San Diego and Kelly Johnson turned into a solid performer. Marcus is now fighting for his life in Colorado, meanwhile Kelly's star is rising. I'm rooting for Giles, but things don't look great for him in Colorado as he has to beat out a highly regarded prospect, Jayson Nix, who is out of options. Marcus has the talent to play in the league, I hope he finds a job somewhere. 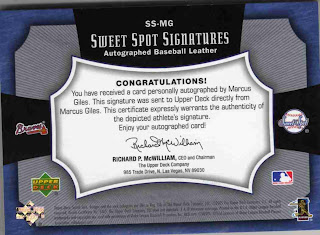 Marcus is my fantasy sleeper because he's suprisingly young and going to Colorado. We'll see how that works out...