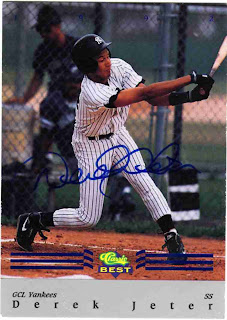 Who is this? Yankees shortstop Derek Jeter.

What is this? An autographed 1992 Classic Best Blue Bonus card, number BC22.

Where'd I get it? In a large autographed lot from Yahoo! auctions.

How much did it cost? Less than a buck per card.

Why is this so special? I've mentioned a few times that I've gotten cards from a huge Yahoo! auction lot and this is one that I got. I don't remember the details of the auction, just that there were a whole bunch of autographed cards (75 to 80 at least) for not a whole lot of money. It seemed like some one was just liquidating a collection, and I had a little extra cash so I pounced. Yahoo! auctions has been dead for a while now, but if anyone remembers the good ol' days when they had free listings, it was a haven for cheap cards. Lots of commons auctions, lots of deals and many sellers blowing out stuff cheap because they didn't have the overhead that eBay charged. Yahoo! killed the golden goose though and started charging listing fees and kaboom, the auction site was dead in a couple of weeks. They finally shut down for good a year or two ago.

This lot had a couple of really good cards (Jeter being one of them) a bunch of non-certified on-card autos, a bunch of minor league autos and a few late 90's one-per pack autos. The Jeter was a nice surprise, but I couldn't figure out where it was from. The Classic Best set inserted these blue prospect cards one in each specially marked jumbo pack (there was another type of jumbo with red foil inserts) but none were inserted with autographs. I do remember seeing some packages for sale in the early 90's with one autographed card for 10 or 15 bucks at book stores. The packages featured such luminaries as Sam Militello and Pat Listach, but there was also signed cards of Ryan Klesko (still kicking myself for not getting one of them) and Good 'ol Derek. There was no COA for Derek in the lot so I couldn't be sure if it was from one of those packs or not. There was quite a few non-certified cards in the lot, so I just assumed it was had signed in person. Maybe the guy I bought it from got it in person, maybe not. I compared the sig to some other Jeter autos and it looked legit to me, so I stuck it in a top loader and filed it away.

Fast forward from the early 90's to a couple of months ago. Mario at Wax Heaven made me a trade offer of a bunch of Braves cards for all the Cansecos I could find. Sure, I said and started plowing through boxes. Goddamn, I got a lot of boxes of cards. Mario said take your time and sent a sweet package of stuff, including one really nice card. (I'll show that one off later) I scrounged through my cards, pulled all the Cansecos I could find and started sending them off. At the same time his wife Tatiana started getting into cards, and became a big Derek Jeter fan. While I was looking for cards to post here I found this card. Thing is, I had also recently pulled a redemption card for an Upper Deck Artifacts Jeter autograph just a few months ago. One Jeter autograph is plenty for someone who doesn't specifically collect Jeter, so I slipped this card in a package for Mario and sent it off. Apparently Tatiana enjoyed the card. Now I got cool cards, Mario has cool cards and Tatiana has a cool card. Trades where everyone wins are one of the best parts of this hobby. 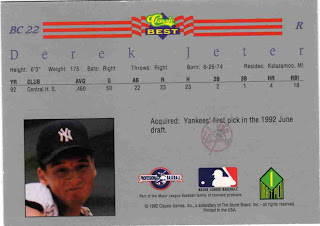 Great card, much appreciated but we want more posts!!!