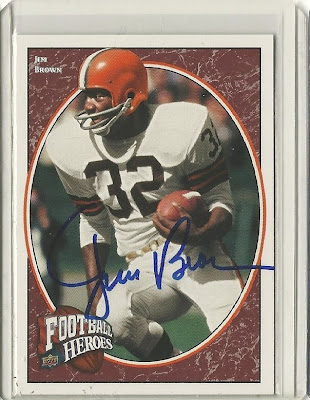 Who is this? Legendary Cleveland Browns Running Back Jim Brown.
What is this? An autograph card from 2008 UD Football Heroes.
Where'd I get it? I got this card signed by Brown after a lecture that he gave at Williams College on October 29, 2009.
How much did it cost? I paid 1 dollar for the card.

Why is this so special? Jim Brown is arguably the best running back to ever play in the National Football League and his signature is probably the best autograph that I have in my collection.

When I heard that he was giving a lecture about "Social Justice" and his "Amer-I-Can" Program at Williams College, located just a few miles from my alma mater, the Massachusetts College of Liberal Arts, I decided that the opportunity to get his autograph was too good to let it slip by.

So, I bought this card for $1 with free shipping on eBay, got to the lecture hall about an hour-and-a-half before the program, and tried to find the best location to wait for Jim Brown. After failing to get his autograph before the show, I grabbed a seat towards the front of the auditorium, on the aisle near the stairs to the stage.

After the lecture and a question and answer session, Brown came down the stairs (just as I expected), and I asked him if he would sign my card. And he said no. But, after more people gathered, he began to (reluctantly) sign for some kids, then took my card, and signed his name.
Posted by George at 12:55 PM