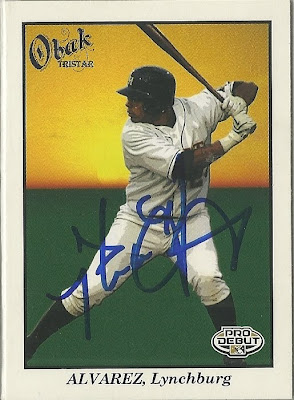 Who is this? Pittsburgh Pirates' Third Basemen Pedro Alvarez
What is this? An autograph card from 2009 TriSTAR Obak
Where'd I get it? I got this card signed by Pedro Alvarez when he was a member of the Triple-A Indianapolis Indians playing against the Pawtucket Red Sox in 2010.
How much did it cost? I got this card when I bought a set of 2009 TriSTAR Obak in the Spring of 2010.

Why is this so special? When I got this card signed, Pedro was one of the best prospects in Minor League Baseball. Alvarez was drafted by the Boston Red Sox in the 14th-round of the 2005 MLB Draft, but chose to attend Vanderbilt and was later drafted in the First-round (Second-overall) by the Pirates in the 2008 MLB Draft.

After a solid-if unspectacular- Major League debut in 2010, Alvarez had a disappointing sophomore campaign, hitting .191 with a .561 OPS in 74 games.

Fortunately, each new season brings hopes of better things. And that hope is essential to Pirates' fans, whose historic futility needs no exaggeration. If the Pirates are going to turn things around, they are going to be counting on Alvarez to help make it happen.

Alvarez was nice enough to also sign this 2008 TriSTAR Prospects Plus card for me. 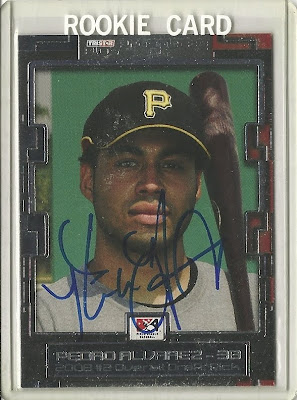 As a Pirates' fan, I'm really hoping he turns around. He tries to pull the ball way too much. When he won rookie of the month in Sept, he was hitting to both gaps, but went back to all pull this past season. I would also like to see his offseason work habit increase!