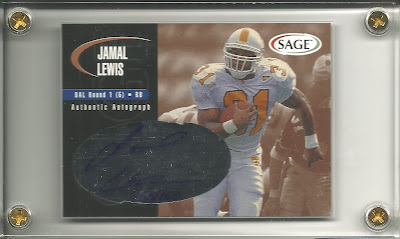 Who is this? Former Baltimore Ravens and Cleveland Browns Running Back Jamal Lewis.
What is this? An autograph card from 2000 Sage.
Where'd I get it? I got it at the Mansfield Holiday Inn Card Show on January 29, 2012.
How much did it cost? $1.50 (That's right, One-dollar and fifty-cents!)

Why is this so special? Jamal Lewis was drafted in the first-round (5th overall) by the Baltimore Ravens in the 2000 NFL Draft out of the University of Tennessee and played nine seasons (he missed the entire 2001 season) in the NFL and when he retired he was ranked #21 All-Time in career rushing yards with 10,607.

As a rookie, Lewis was the Ravens starting running back on their Super Bowl XXXV winning team. In the Ravens victory over the Giants, Lewis became only the second rookie to rush for over one-hundred yards and the youngest player to ever score a touchdown in a Super Bowl.

Lewis' best season was in 2003, when he rushed for 2,066 yards and 14 touchdowns. At the time, Lewis was one of only five running backs to ever rush for more than 2,000 yards in a season. The highlight of the season was when Lewis set a new NFL record for rushing yards in a single game when he ran for 295 yards against the Cleveland Browns on September 14, 2003. At the end of the season, Lewis was named the AP NFL Offensive Player of the Year, AFC Player of the Year, and was named to the All-Pro and Pro Bowl teams. (Suprisingly, 2003 was his only Pro Bowl season.)

Before the 2010 NFL Pro Bowl, it was announced that Jamal Lewis was named to the NFL's 2000s All-Decade Second-Team.

To be honest, I was shocked to see this Jamal Lewis 2000 Sage Autograph rookie card in a $1.50 bargain box. I have found lots of great deals in bargain boxes over the years, but a rookie autograph of one of the best running backs of the 2000s for less than a pack of cards might be one of the best deals around.
Posted by George at 3:36 PM