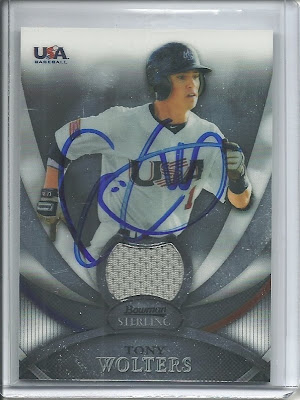 Who is this? Cleveland Indians Prospect Tony Wolters.
What is this? An autograph card from 2010 Bowman Sterling Team USA Game-Used.
Where'd I get it? I got this card and several others signed by Tony during batting practice at the 2011 New York-Penn League All-Star game in Lowell, MA last August.
How much did it cost? I paid $2 for this card at a card show last summer.

Why is this so special? Tony Wolters was a member of the Team USA 18 & Under squad in 2009 and 2010 before being drafted and signed by the Cleveland Indians in the third-round of the 2010 MLB Draft. In order to secure Wolters, the Indians had to offer him a $1.35 million signing bonus, over three-time MLB's recommendation for a third-round pick.

Wolters, who currently plays shortstop, but is expected to move to second base after the Indians drafted SS Francisco Lindor in the first-round of the 2011 MLB Draft, was recently ranked as the Indians #3 prospect by John Sickels and played well in his first season of professional baseball, hitting .292 with 10 doubles, 3 triples, and 19 steals in 69 games for Mahoning Valley in 2011.

Wolters has a loopy and kind of sloppy signature that seems to be made of a T and W with some loops. He was nice enough to sign six cards for me when the American League All-Star Team was taking batting practice. Although he was only playing in Short-Season A ball, he seemed to have the swagger of a Major Leaguer and looked good at the plate and in the field. 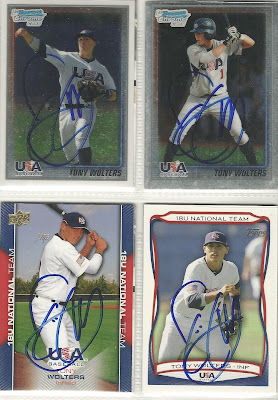