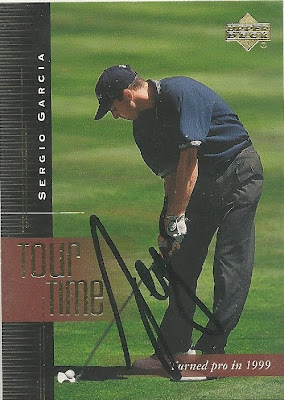 Who is this? PGA and European Tour Golfer Sergio Garcia.
What is this? An autograph card from 2001 Upper Deck Tour Time.
Where'd I get it? I got this card signed at the 2006 Deutsche Bank Championship in Norton, MA.
How much did it cost? About 25 cents.

Why is this so special? A member of the PGA Tour since 1999, it is hard to believe that Sergio is still only 31 years-old. (He turns 32 on Monday 1/9/2012) Since turning pro, Garcia has earned over $28 million and won seven PGA Tour events, including the 2001 and 2004 Buick Classics, and the 2008 Players Championship. During that time he has also been one of the most dominant players on the European Tour.

Garcia was a phenom as a teen, becoming the youngest golfer to ever participate in the Ryder Cup as a 19 year-old in 1999. His early success and advanced skills made many think that he would be the biggest threat to Tiger Woods' dominance on tour, but he has often fallen short of expecations.

For a short time in 2011, Garcia actually walked away from golf. Fortunately, after some time away from the links, Garcia returned and has begun to remind fans why he was considered one of the best golfers in the world.

Sergio was nice enough to sign this card for me during a practice round at the Deutsche Bank Championship. He had just completed some practice on the putting green and was headed to the First Hole to tee-off and I was the only fan there at the time.
Posted by George at 10:31 AM