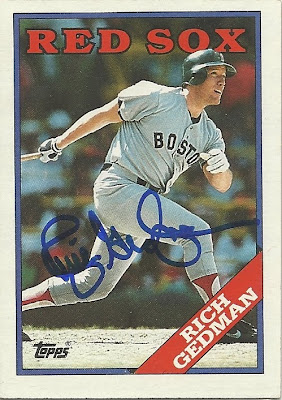 Who is this? Former Boston Red Sox Catcher Rich Gedman.
What is this? An autograph card from 1988 Topps.
Where'd I get it? I got this card signed by Rich at the 2011 New York-Penn League All-Star game where Rich was the American League Batting Coach.
How much did it cost? I found this card and two other Gedman's in a shoebox a few minutes before I left to go to the All-Star game. I assume that I basically paid nothing for the cards.

A two-time American League All-Star (1985, 1986), Gedman caught two of the most historic games in the history of the Boston Red Sox organization. First, Gedman caught the first nine-innings of the Longest Game in the History Professional Baseball, the 33 inning battle between the Triple-A Pawtucket Red Sox and Rochester Red Wings that began April 18, continued into April 19, and was completed on June 23, 1981 at McCoy Stadium in Pawtucket, RI. Other participants in the Longest Game included Cal Ripken, Jr. and Wade Boggs.

In addition, Gedman was the Red Sox Catcher in Game Six of the 1986 World Series, where a "Wild Pitch" by Bob Stanley (that many considered an error by Gedman) and a ball hit through Bill Buckner's legs were the difference that allowed the Mets to win the game and go on to win the World Series.

Gedman's career included an additional bizarre twist in 1987, when he, along with ten other free agents (including Tim Raines and Andre Dawson), failed to reach an agreement with their teams by a January 8th deadline and were thus not allowed to re-sign until May 1.

After retiring from baseball at the age of 34, Gedman has spent some time coaching and managing. Gedman made his return to organized baseball in 2011 when he took over as the Lowell (MA) Spinners (Red Sox Short Season NYPL A-Ball Affiliate) batting coach.

Gedman was very nice about signing the three cards that I had and his signature looks very nice. 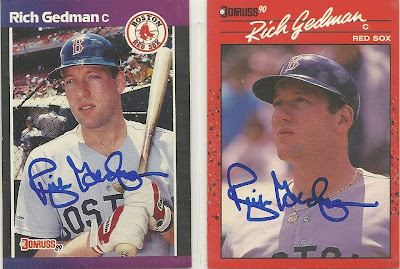