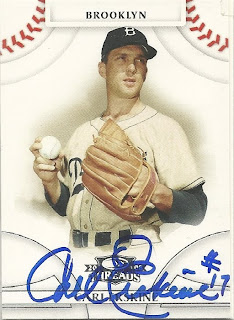 Who is this? Legendary Dodgers' Pitcher Carl Erskine.
What is this? An autograph card from 2008 Donruss Threads.
Where'd I get it? I got this card (and four others seen below) signed by Mr. Erskine Through the Mail.
How much did it cost? I got the 2008 Donruss Threads card when I bought the set in 2009 and the other cards here and there over the years.

Why is this so special? Carl Erskine spent his entire career, which lasted from 1948 until 1959, as a member of the Dodgers. During that time, Erskine had a career 122-78 record and a 4.00 lifetime ERA.

While Erskine may not be as well known as some other pitchers from the 1950s, he was a key piece of the Dodgers' teams that won 5 National League Pennants and the 1955 World Series; threw two of the seven no-hitters pitched in the National League 1950s; and set a World Series single-game record by striking out 14 Yankees in 1953.

In addition to his performance on the field, Erskine stands-out for his generosity to fans, as demonstrated by his willingness to sign autograph requests Through the Mail. Erskine's signature is clear and stylish, and I like the way that he seems to look for an open space to sign on the card. In addition to the four cards of him that I have sent, I also asked him to sign the Ebbet's Field card from 2010 Topps. 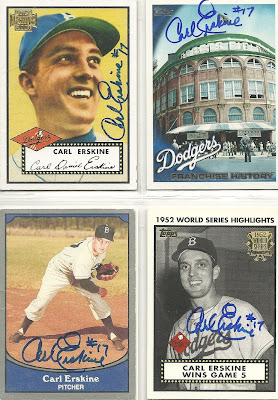 Really cool autos. I am about to send out some cards to him myself. What did you do to prep the Donruss Threads card? It is super glossy.

I use baby powder to prep all glossy cards. Just put a small sprinkle of powder on the card, rub it in, then wipe it off with a napkin or cloth.