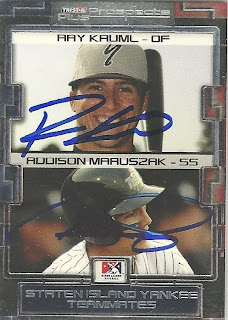 Who are these guys? New York Yankees Minor Leaguers Ray Kruml and Addison Maruszak.
What is this? An autograph card from 2008 TriSTAR Prospects Plus.
Where'd I get it? I got this card signed by Addison in July and Ray in August when they were playing for the Triple-A Scranton Wilkes-Barre Yankees against the Pawtucket Red Sox.
How much did it cost? I got this card when I bought two sets of 2008 TriSTAR Prospects Plus a few years ago.

Why is this so special? Neither Kruml nor Maruszak are top prospects, but both took the time to sign this card, which means that, regardless of whether or not either of them ever make it to the Bronx or become big-leaguers, both will always have a place in my autograph collection.

All too often, fans and autograph collectors are focused on chasing the "big fish," allowing players like Ray Kruml and Addison Maruszak to pass their entire careers barely noticed playing in half-empty ballparks across America. I like the inclusion of Kruml, a 2008 11th round-pick out of the University of Southern Alabama, and Maruszak, a 2008 17th round-pick out of the University of South Florida, in sets like TriSTAR Prospects Plus and Donruss Elite Extra Edition not just because they provide me something to get signed, but also because they memorialize their baseball careers on cardboard for all-time.

I thank Ray and Addison for signing my cards, and I wish they both long and successful careers in the future. 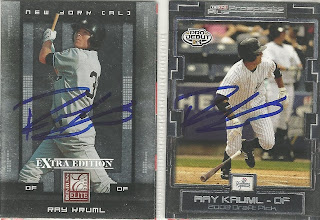