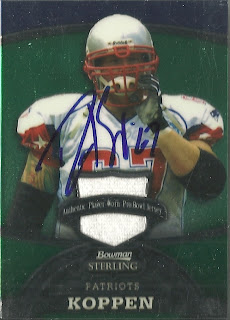 Who is this? New England Patriots' Center Dan Koppen.
What is this? An autograph card from 2008 Bowman Sterling Authentic Player Worn Pro Bowl Jersey Green Parallel Short-print numbered 076/249.
Where'd I get it? I got this card signed by Dan at Patriots' Training Camp in 2009.
How much did it cost? I paid a total of about $5 for the Green and Blue (seen below) versions of Koppen's 2008 Bowman Sterling Pro Bowl Jersey cards.

Why is this so special? Dan Koppen has been the Patriots' starting center for the past nine seasons since he was drafted in the fifth-round of the 2003 NFL Draft out of Boston College. During that time, Koppen anchored the line of two Super Bowl winning teams in 2003 and 2004 and the Patriots' AFC Championship team in 2007. For his efforts, Koppen was named to the Patriots' 2000s All-Decade Team and was selected to the Pro Bowl in 2007.

Unfortunately, Koppen fractured his ankle in Week 1 of the 2011 season, forcing him to miss the rest of the season after being placed on the Injured Reserve list on September 21.

While I love all of my autographed cards, I think that some of my favorite cards that I have gotten signed are game-used cards. There is something all-the-more special about asking a player to sign a card with a piece of their game-worn jersey on it, and it is even cooler that the 2008 Bowman Sterling cards were specifically from the 2007 Pro Bowl.

Dan has always been good about signing at Training Camp, and I was fortunate enough to also get him to sign the Blue version of the card, numbered 040/349. I'm hoping that he is able to bounce back from the injury that forced him to miss almost all of the 2011 season and return to Center the Patriots for years to come. 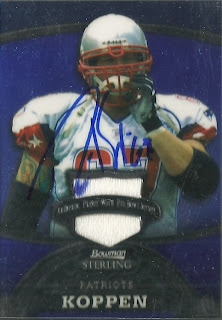 Nice cards. I also like to get jersey/bat cards signed. It is cool that the second card you posted had a signature that spread onto the jersey swatch.