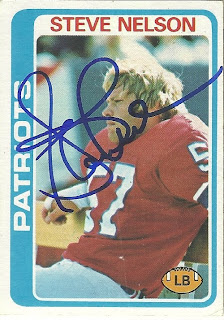 Who is this? Former New England Patriots Linebacker Steve Nelson.
What is this? An autographed card from 1978 Topps.
Where'd I get it? I got this card signed by Nelson before the 2011 New England Patriots Hall of Fame Induction ceremony in September.
How much did it cost? I bought the card for about 5 or 7 cents.

Why is this so special? Steve Nelson played his entire 14-year career with the New England Patriots and after his retirement was honored by being inducted into the Patriots' Hall of Fame in 1993 and having his #57 retired.

Nelson first made a name for himself playing linebacker for North Dakota State, where he was a two-time All-American. After graduating, he was drafted by the New England Patriots in the second-round of the 1974 NFL draft. A two-time Patriots' team MVP and three-time Pro Bowler (1980, 1984, 1985), Nelson was a defensive standout who helped lead New England to Super Bowl XX.

When he retired in 1987, Nelson had recorded a very Patriotic 1776 career tackles. Since then, Nelson has been active in the community and is admired for being one of the players that helped bring respectibility to the New England Patriots' franchise.

Nelson was very nice about signing autographs for fans at the Hall of Fame event. In addition to his 1978 Topps Rookie Card, he also signed this 1986 Topps card for me. 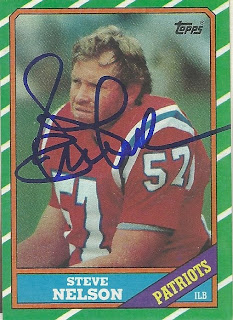