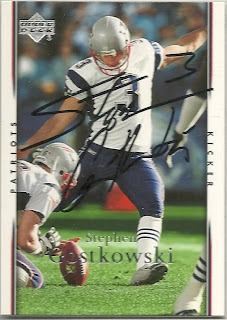 Who is this? New England Patriots Kicker Stephen Gostkowski.
What is this? An autograph card from 2007 Upper Deck.
Where'd I get it? My wife, Kristina, got this card autographed by Gostkowski at Patriots' Training Camp in 2008.
How much did it cost? I got the card out of a pack in 2007.

Why is this so special? Stephen Gostkowski replaced Adam Vinitari as the New England Patriots' placekicker in 2006 after being selected in the fourth-round out of Memphis, where he played both football and baseball. As a matter of fact, Gostkowski was originally on a baseball scholarship, and had to make the football team as a walk-on.

Known for his accuracy, Gostkowski is one of only two players in the history of the National Football League to score 500 or more points in his first four seasons. In addition, he led the NFL in scoring in 2008 and was selected to the Pro Bowl and All-Pro teams.

As you can see from the 2007 Upper Deck card that my wife got signed in 2008, Gostkowski has a very nice and clear signature. However, when I got him to sign his 2009 Upper Deck card during Patriots' Training Camp in 2011, the signature was not nearly as nice. To explain the difference, I have a few theories: (1) Gostkowski was less popular in 2008, and was more enthusiastic to sign his card for a fan, (2) Gostkowski was more enthusiastic to sign for my beautiful wife than he was to sign for me, or (3) Gostkowski was suffering from severe dehydration/heat stroke and/or was intoxicated when he signed my 2009 card. My guess is theory 1, but I could be wrong. 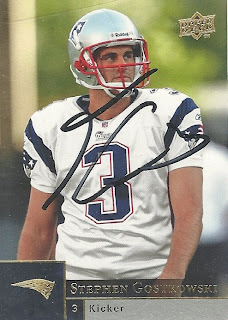