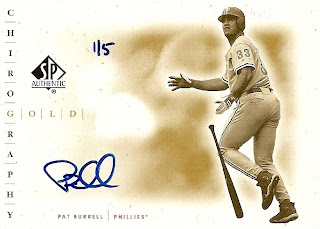 Who is this? Pat Burrell, free agent LF, formerly of the Philadelphia Phillies

What is this? An autograph card from 2001 SP Authentic, card number G-PB

Why is this so special? In my previous posts, I have displayed some of the autographs that I have personally pulled. But this card is the centerpiece of my entire collection. It's not the card that really hooked me into collecting. No, that's the 1994 Lenny Dykstra Topps card. This card is one of 34 Pat Burrell autographs and 732 Pat Burrell cards I own. Until recently, this was the lowest numbered Burrell card I owned.

As long as I can remember, I've been a Phillies team collector. I've always had a favorite player or two on the team who earned my collecting focus. First Lenny Dykstra and Darren Daulton, then Rico Brogna (OK, the late 1990s Phillies stunk), and from 2000-2008, Pat Burrell. Today marked the end of Pat Burrell the Phillie. For the next three years Raul Ibanez will man left field for the Phillies. Nevermind that he's another left-handed bat behind Chase Utley and Ryan Howard or that he's roughly four years older than Burrell. I can't even consider those rational thoughts right now. Pat Burrell's gone!

Burrell's rise to the majors came in 2000, immediately replacing Brogna at first base and as my favorite player after Brogna suffered a broken arm. He broke out in 2002, hitting 37 home runs and 116 RBIs. The 37 home runs were the most by a Phillie since Schmidt hit 37 in 1986. He seemed like the second coming of Michael Jack Schmidt at the time. After that year Burrell was rewarded with a six year contract. In 2003 he hit .209 with 21 HRs and quickly became the subject of Philadelphia's famous ire. Burrell never quite lived up to the promise of that 2002 season, but he settled into a fairly steady and consistent pace year in and year out. He balanced dreadful slumps with torrid hitting streaks to reach the same numbers every year. I think the arrival of Jim Thome and then Ryan Howard took the pressure off Burrell and he became, once again, quite the fan favorite.

From those majestic home runs off Mets closers (especially "The Rat" Billy Wagner) to the lead-off double in the 7th inning of Game 5 that, by a cruel twist of fate, was hit to the deepest part of Citizen's Bank Park to leading the parade down Broad Street, thanks for the memories Pat.

This auto is a pretty standard Burrell issue PBll. It's recognizable, at least to me, and unique. I enjoy the slightly darker background on the gold version as opposed to the stark white of the base autograph. I love the picture. It's an admiration of a job well done on another ball smoked into the left field seats. The only thing I dislike about this card is that he is wearing number 33, which he wore in 2000. Ron Gant departed Philly after the 2000 season and Burrell took his number 5 and his spot in left field.

I look forward to collecting Burrell cards in a new uniform, as long as that uniform is not orange and blue. The move to a new team could mean more cards for Burrell. He's been pretty much the forgotten man in Philly as far as cards go, largely because most smaller sets don't get past the big four of Hamels, Howard, Utley, and Rollins. If he moves to the Reds or Giants (two of the teams he's been linked to), he would possibly make it into some of those smaller sets. As for me, I think I'm going to move onto one or two of the Phillies best prospects, like Lou Marson and Michael Taylor.
Posted by Patsearcher at 11:41 PM

Great looking card. I have the same card numbered 3/5. Wish Pat was still a Philly.

I will miss him too. I admit I have had my doubts with Burrell, but he has always been a standup guy. And the final thrills he provided Phils fans this past October will always be remembered.

Burrell will always be a Phillie to me, hopefully he will go somewhere I can cheer for him again.

Thanks Paul. One of the best things about Burrell is how well he withstood the Philly media pressure and fan pressure. He took a lot of criticism over the years, but he never lashed out like Scott Rolen and Mike Schmidt did at times.

Although I didn't get to see Pat play very often I did see his debut game in Houston on May 24, 2000. He went 2 for 5 (I looked it up). I remember being impressed with him and have followed his career. He was an important part of the Phillies coming back to respectability and I'll miss him.