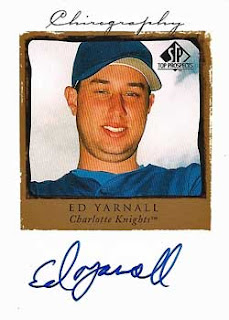 What is this? An certifed autograph insert card from 1999 Upper Deck SP

Where'd I get it? I picked this up out of the $1 cards box at a baseball card show this summer.

Why is this so special? Yarnall pitched in a handfull of games for the Yankees in 1999 and 2000, but I'd say his biggest claim to fame is being traded for Mike Piazza. (Yarnall was originally drafted by the Mets and was included with fellow minor league pitcher Geoff Goetz and outfielder Preston Wilson in the trade that brought Piazza to New York.)
I've watched Yarnall pitch for the Long Island Ducks in the independent Atlantic League in recent seasons. Though the autograph on this card isn't likely to win Yarnall any penmanship awards, it is far neater than his "at the ballpark" signature.
Posted by Paul Hadsall at 9:57 PM