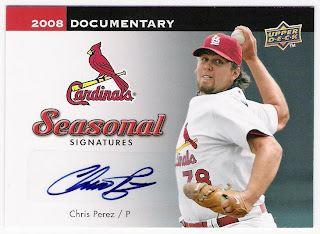 who is this? cardinals' closer in waiting chris perez

what is this? an autograph card from 2008 upper deck documentary aka the worst issue of 2008

where'd i get it? from the hobby box i busted before i knew that documentary was the worst issue of 2008

why is this so special? well, i don't really care for this issue. i had such high hopes, too. however, i do like this card for the arm angle and the way his arms look like mirror images of each other. the colors are nice - good placement of the team logo - and perez seems to be a decent closer prospect.
the autograph itself is a sticker auto. nice blue sharpie, but it seems cramped.
it still carries the stain of documentary, though, so i probably won't be keeping this one.
Posted by gcrl at 7:42 PM

Looking to get rid of any Yankees or Pujols? I have a bunch of Documentary I could trade, as well as other stuff.