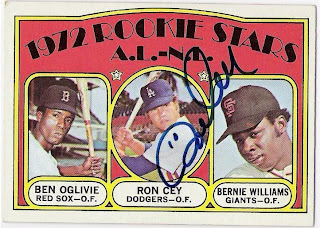 Who is this? the penguin, ron cey

What is this? an autographed 1972 topps rookie card

Where'd I get it? from kit young sportscards mail order catalog about 14 years ago

How much did it cost? i think i paid around $20

Why is this so special? ron cey was the third baseman for the long lasting dodger infield of my youth, that's why. actually, the penguin was arguably the dodgers' best player during his tenure. he was the los angeles dodgers career home run leader until eric karros came along.
this card is his rookie card, a high number to boot. plus it features ben ogilivie and (not that) bernie williams. notice that he is listed as an outfielder. the entire dodger infield were converted from different positions - garvey from 3rd and russell, lopes and cey from the outfield.
cey would appear on another group rookie card in 1973, this time as a 3rd baseman with some guy named schmidt.
the auto itself is pretty nice - strong blue sharpie with cey's uniform number "10" inside the loop of the "R". pretty standard cey auto.
Posted by gcrl at 10:44 PM

I want that card (well, not THAT one, just one like it). I didn't know Cey was converted from the outfield. I knew about the other three guys, but not him. That makes the card even more interesting.