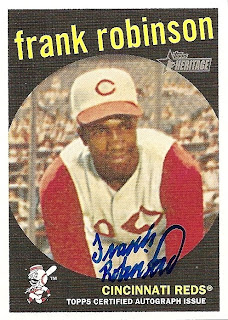 Who is this? Reds and Orioles legend Frank Robinson

Where'd I get it? I stopped into my local card shop to pick up a new super jumbo card box that I will be using in the course of my collection reorganization. I picked up three loose packs of Heritage High Numbers and this was in my second pack. And that kiddies is why I buy hobby.

How much did it cost? $3 for the pack

Why is this so special? It's Frank Robinson! Robinson retired with 586 home runs, behind only Mays, Ruth and Aaron at the time. He is the only person to win the MVP in both leagues and he won the Triple Crown and the World Series MVP in 1966. He also won the NL ROY in 1956. He was the first black manager in the majors and won the AL Manager of the Year Award in 1989. He was a first ballot Hall of Famer, being selected in 1982. 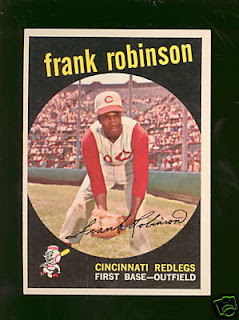 Topps made a few changes to the card for the Heritage version. Gone is the McCarthy era "Redlegs" replaced with the proper Reds. Topps replaced Robinson's position with the words Topps Certified Autograph Issue and added the Heritage logo in the top right corner. Topps also removed the facsimile auto to make room for the real deal. Finally, the Heritage version is a much tighter version of the same photo, which has made the photo a little blurry, particularly on Robinson's face.

This is just a tremendous card and far and away the best autograph on the Heritage High Numbers checklist. Robinson is one of the greatest players of all time and this is certainly the best autograph I've ever pulled out of a loose pack. It also probably nudges out the Ernie Banks I pulled out of a box back in 2001. This pull also makes up for the two hitless boxes of 2006 Heritage I recently opened.

The auto itself is great - legible, noticeable on the card. The signature is also on-card, which is always a plus. Robinson's auto reminds me of a lot of the autographs of players from that era. It looks like handwriting as opposed to the illegible scrawls of many of today's players. Here's to you, Mr. Robinson.
Posted by Patsearcher at 12:57 AM

Thanks Mario. I've actually been monitoring a few eBay auctions to try to land a Robinson auto.

Wow! Nothing like pulling a Hall of Famer out of a loose pack. Good thing you needed that Super Jumbo Box.

If you get this can you email me.

I have a question you may be able to help me with.

Mo one likes you. The only way to gain friends and popularity for your blogs is to give that card to me. If not you will step on a crack and break your mother's back. On top of having no friends. No one wants that.

My cards are my friends.