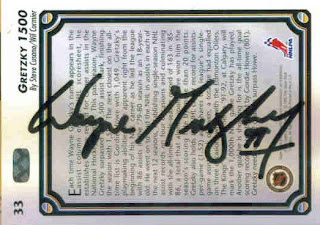 Who is this? The Great One, Wayne Gretzky.

Why is this so special? Because it's WAYNE GRETZKY!!! As a kid growing up in Kansas, I only knew of one hockey player and it was the Great One. Gretzky revolutionized the sport of hockey. There was never anybody better before him and there will never be another one like him again. He scored over 200 points four times (that's averaging about 2.5 points per game) and had at least a point a game every season, except his final one. In the 1981-82 season, he scored 92 goals in 80 games. He currently holds 60 NHL records, including most goals, points, and assists in the regular season and career. In fact, he has over a 1000 more points than the second place guy (Mark Messier) and even has more assists than Messier has points. He was inducted into the Hall of Fame eight months after hanging up the skates. These days, he's the head coach of the Phoenix Coyotes (and part owner, I believe).

I got this card signed through the mail in the early '90s. In fact, just about every card I will be showing on here was signed through the mail in the early '90s. The card was a pretty cool card that celebrated him getting 1500 assists. On the front is a painted picture with three Gretzky's on it. One was a close-up of his face and the other two were full-bodies of him, one as a King and one as an Oiler. There was 1500 in the background. You can see the card front here. As you can see, it would have been a great card to get signed. And it was, but on the back? WTF Wayne? Who the Hell signs the back of their cards? Oh well, it is the Great One.

I read somewhere that Wayne still signs through the mail, but some people think that it is done with an autopen. That may be the case now. But if you compare the suspected autopen signature to the one on this card, they are completely different. Do I know %100 that this card was signed by Wayne? Of course not. But it is still my prime hockey autographs and I am very glad to have it in my collection.
Posted by zman40 at 10:42 PM