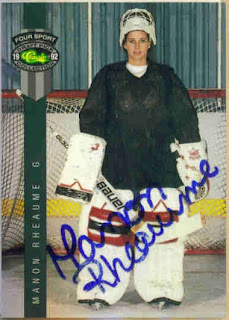 Who is this? Female hockey player, Manon Rheaume.

What is this? An autograph card from 1992 Classic Four Sport, card number 224.

Why is this so special? As far as I know, this is the first female to play professional hockey with the big boys. During the 1992-93 season, Manon got into two games with the Atlanta Knights (Tampa Bay's top affiliate) of the old IHL. Unlike Cammie Granato, who was known as a good hockey player playing against other women, Manon made her name playing against guys.

I remember the media making a big deal out of this with Classic doing the same by making a ton of cards of her for a few different sets. I sent this card to the Knights. They must have forward the letter to her, since it was unlikely that I actually sent the card to her while she was with the team (life was rough before the internet). In here two games with the Knights, she played sixty-six minutes and gave up seven goals. Ouch.

The next few years she played a few games in the ECHL, PSHL, WCHL and two more games in the IHL (where she did much better than the first time around). All told, she played in twenty-two minor league games (according to hockeydatabase.com).

Well, I just checked her Wikipedia page and she was not the first women to play minor league hockey. But, she was the first one to play in an NHL exhibition game, which she did twice. So, that is even cooler.
Posted by zman40 at 7:08 PM

Why does it look like her boobs are visible on that card?

I'm pretty sure that is her chest protector. It there was any boobs, I would have noticed it; like sixteen years ago.

definitely and interesting auto to have in ones collection.

I saw her play in 1997 or '98 vs the San Jose Rhinos, which was a roller hockey team. She was the back-up goalie, but came in for a period. I was probably one of the few that knew who she was, thanks to being a card collector. After all, for a time, she was the queen and Eric Lindros was the king right?

Wow! She is pretty. I'd take her to dinner any night of her choice.

If you read this Manon,email me. Let's get together.